Those who attend Philadelphia University are so very often found ripping out their eyeballs working on a Design project, or finalizing some twenty paged Biology report. For the vast majority of us, the only concept of free time is replaced by a stopwatch rapidly ticking down to a deadline. Very rarely do we have days off. Because of that fantastic blizzard we had the other day, we all had two glorious days off. Students a plenty were observed far and wide crafting magnificent snow creations out of the dense, wet snowfall. A select bunch were extremely impressive. Enjoy!
-- as always, click on a photo to view a larger size --
PLEASE NOTE: ALL PHOTOS HAVE HAD THEIR CONTRASTS ALTERED
White objects on white backgrounds are indiscernible otherwise
The Scholler Hall Dinosaur 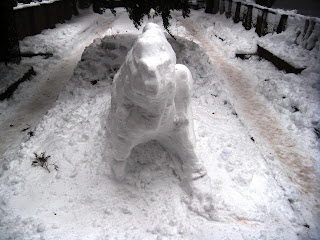 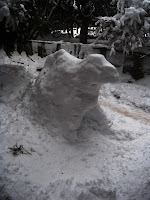 Well, at least that's what i think it is. Of all the creations on campus, i chose the five best looking ones. This one comes in at number five. Standing roughly four feet tall, two feet wide and five feet long, this creature appears to be protecting the Scholler Garden. I am sure when first crafted, this creature was more detailed. Unfortunately the temperature today rose above freezing so everything that hadn't been packed into oblivion (like the other four creations i will discuss) started melting. None the less, it is very creative. If you think it is something else, please by all means leave a comment. I would be very curious to see what you all think this is. 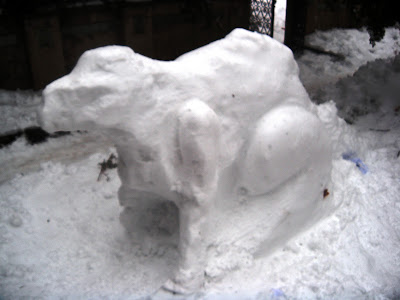 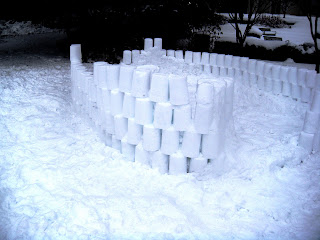 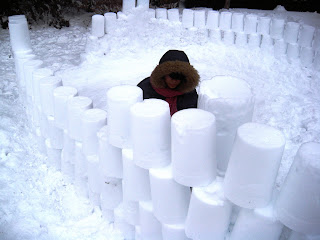 Also known as the "Igloo" and the "Trash Can Palace", Fort Stephanie is the brainchild of first floor Scholler Hall resident, Stephanie, and is located in the A&D Center Quad. Still currently under construction as of 2pm, today, this creation consists of over 150 individual "trash can bricks", and that number is counting. When I say trash can, i mean just that. Another helper in the construction was Leena, also a Scholler Resident, who provided the rigid plastic lining of her trashcan to Stephanie, so that she might be able to achieve her inconceivable dream of making a legit igloo out of cylindrical blocks. Other helpers included Ashley, and myself. That whole back wall there in the photo to the left was my contribution. Now the dimensions of the thing so far are approximately fifteen feet long, by eight feet wide, by currently four feet tall. However, it is supposed to get up to six or seven feet tall when, and if, completed. Everyone, including myself, has told Stephanie that with the shape she is using, combined by the size, that an igloo would be next to impossible. Though, it is hard to argue with someone who is as determined as she is. Who could blame her? I think an igloo would be impressive. Others on campus have tried, but they all cheated. Taking a snow mound and hollowing it out does not count people! In an effort to help her vision i provided my sixteen gallon trashcan from my room (don't worry, i use trash bags.). Packing snow into it allowed the construction of columns for the interior, currently just test columns, hence the distinct lack of any interior support structures, except for what is seen in the photo to the bottom left. I think Stephanie is finally realizing that her dream of a legit igloo may be in fact rather unlikely, so she has settled to make a fortress with a thatched roof consisting of downed pine branches. 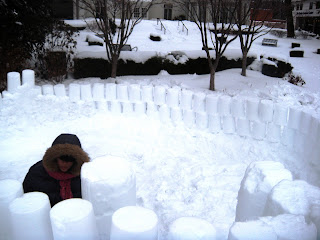 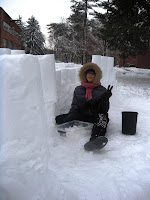 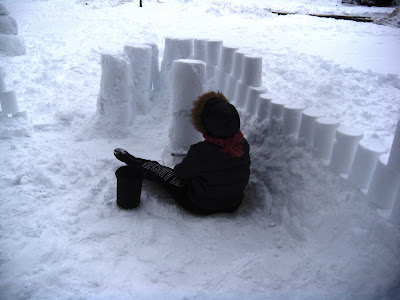 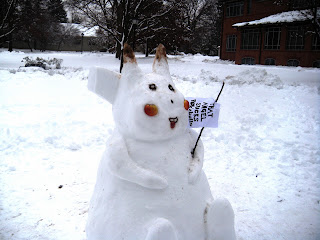 Now this one i find a little odd. I don't understand why people still like pokemon. Personally i think they're stupid. My opinions aside, i do have to admit that this snow creation doesn't look half bad. Found in the Gutman Quad, and standing about five feet tall, and three feet long and wide, this Pikachu has all the elements of the traditional snow man, with a redefined shape. Its cheeks are apples cut in half, and that's all i dare wanted to really know. It smelled of rotting fruit, and garbage, so i didn't want to get too close to check out the finer details. It features [poorly] defined arms and legs, and carries a wonderful sign that is the reason for my title. I will let you enlarge the photo and read the sign yourself. The only reason i give this creation the third spot on my list is for its crisply defined tail. It is rare to see snow with crisp edges, and clearly defined angles. 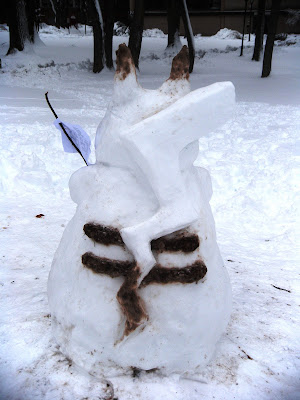 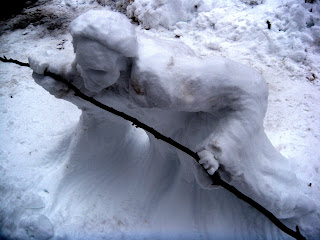 Located in front of the Gutman Library, this creation lives up to name. When photographing it a bunch of passersby exclaimed that they didn't even see it before, for it sits plain sight, but is most likely overlooked by the campus's number one best snow creation, which is the next thing on my list. This grim lurks at about three feet tall, is four feet long, and one or so feet wide. Its face is clearly defined. I boasts two arms with hands that actually hold a "staff" - granted additional out-of-camera supports were required. This lifelike snow sculpture has definable robes, that flow just the way you would imagine robes to flow. You can see into his sleeves, and behind his collar. Best of all, it looks like it is actually rising from the ground. Definitely some thought went into this demonic thing... which makes me question people, their intentions, and mental stability. 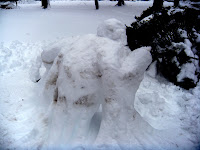 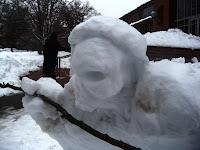 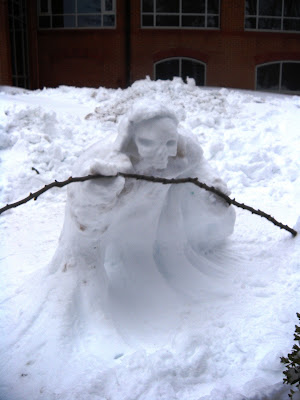 The Gutman Angel of Literature 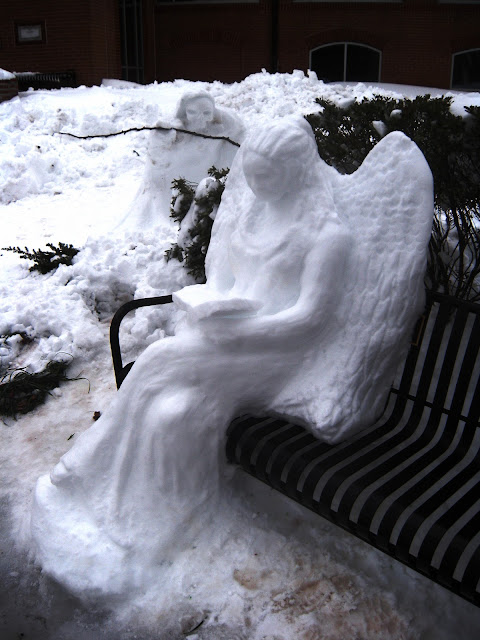 Coming in at number one, is perhaps one of the most amazing snow sculptures i have ever seen. Located on the Gutman Library Bench, on the path that leads from Kanbar, sits an elegant, human-sized angel. The detail carved into her form is spectacular. She boasts dreadlocks for hair (probably not intentional, but snow can only be shaped so much) with bun and bangs included, features two brilliant wings, and sits cross legged with a book in her lap. She wears a gown, that like the grim reaper, is defined, and flows. The gown sits low on her neck, folding up with grace. On the one exposed foot, is a shoe. What is most spectacular about this particular sculpture aside from the detail is the fact that she was constructed on a bench, and there is not one single support anywhere. There is nothing under the bench, and nothing really holds up her wings. Now, i think it is in poor taste that the reaper lurks just behind her. Hence why i further question peoples intentions, but regardless, this angel is magnificent. Amen. 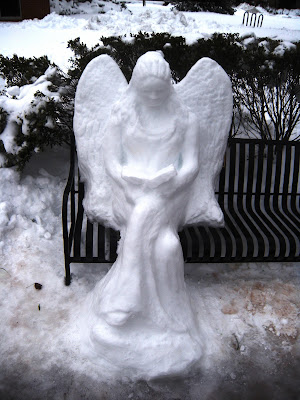 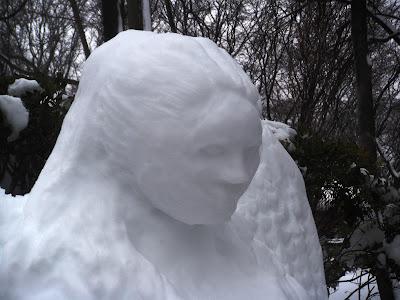 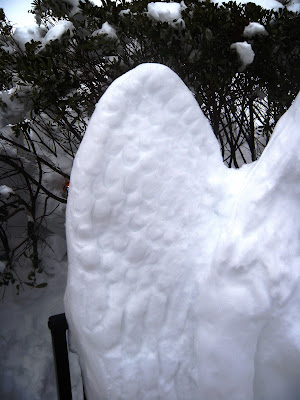 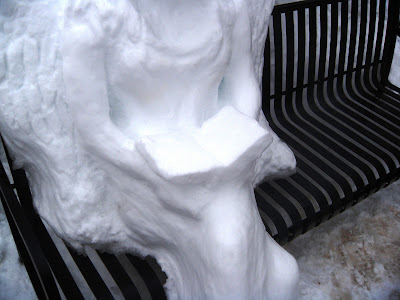 Published by Unknown at 6:24 PM

Join me on Crowdtap! http://bit.ly/IeQqxF